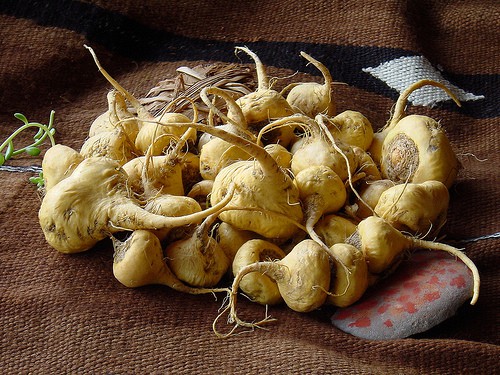 The highlands of Peru are the home of maca (Lepidium meyenii), a cruciferous plant that can count broccoli, cauliflower, and kale among its relatives, and a plant some claim is a boost to men’s sexual health. A new review published in BMC Complementary and Alternative Medicine (August 2010) presents what has been discovered about maca root benefits for sexual health and its effect on libido and erectile dysfunction in the limited number of randomized controlled studies conducted so far. (1)

Use of maca root goes back a long way when, according to Incan folklore, warriors took the plant before they went into battle because it increased physical strength. Maca also elevated their libido, a situation Incan leaders found unacceptable for their purposes so they eventually prohibited their soldiers from taking it during wartime.

In recent years, scientists have explored the biochemistry behind the claims of enhanced sexual function and stamina associated with maca. Because maca belongs to the Brassicacae family, which is known for its anticancer properties, there is also speculation that it may be helpful in protecting against prostate cancer or other prostate conditions.

One of the more recent studies comes from Italy, where investigators in the department of urology at Morgagni-Pierantoni Hospital conducted a double-blind trial. Fifty men who had mild erectile dysfunction were enrolled: half were given 2,400 mg maca root daily and the other half received placebo. After 12 weeks, men in the maca-treatment group experienced a more significant increase in the International Index of Erectile Function (IIEF-5) than men in the placebo group. The scientists concluded that maca supplements provide a small but significant effect on sexual health and well-being in men who have mild erectile dysfunction. (2)

Maca may also benefit the prostate, and in this case color matters. Maca comes in red, yellow, and black, and in a 2009 study researchers compared the impact of each one on prostate size in rats with induced benign prostatic hyperplasia, a condition in which the prostate is enlarged. Red maca appears to have a prostate-reducing effect, while yellow offers a mild impact and black has none. (3)

Three other studies are also worth noting. In one, researchers evaluated the effect of 1,500 mg and 3,000 mg of maca compared with placebo in a 12-week trial. After 8 weeks, men who took maca reported an improvement in sexual desire in one while men in the placebo group did not. (4) In another, maca increased sperm count, sperm motility, and seminal volume, which could improve fertility. (5) The third study was conducted at Massachusetts General Hospital and involved depressed men and women. Participants in this study who took 3,000 mg maca daily reported an improvement in sexual dysfunction. (6)

The ability of maca to improve sexual health may be attributed to several different components. Maca contains higher levels of glucosinolates than its cruciferous cousins, and substances hydrolyzed from these glucosinolates reportedly inhibit certain types of cancer in rats. (7) Maca’s ability to enhance libido is attributed to its polyunsaturated fatty acids. However, experts are not certain how maca impacts erectile dysfunction without affecting levels of testosterone, estradiol, and other hormones. One idea is that it acts on the receptors for these hormones rather than on the hormones themselves. (8)

Although the amount of research on maca is limited, so far it appears to have a positive effect on sexual health and prostate health. Maca is available as capsules, powder, tablets, and an extract. Several studies have shown 3,000 mg daily to be an effective and safe dose, but it is best to take maca according to package directions and to consult a knowledgeable healthcare provider.

Sorry. No data so far.